Born in Moscow, Michail Markov began studying piano at the age of 7. Three years later, he performed his first solo concert in his hometown with an orchestra in the Concert Hall of the Tchaikovsky Conservatory in Moscow, where he later continued his musical education with Professor Victor Merzjanov. In 1975 M. Markov graduated with honours at the Conservatory. Including an honourable mention for concert and chamber piano, accompaniment, as well as for professorship.
In the following years, Michail Markov successfully performed in the Eastern countries of the former Soviet block. In the years just before leaving Russia, he was a deputy director and piano teacher at the famous Moscow Gnessin Special School for musically gifted children. Since 1991, the musician has been living in the Netherlands where he has continued his successful combination of teaching and musical performances. M. Markov has made CD recordings in France and Germany with works of D. Schostakovtch, Y. Galperine, R. Shchedrin and others. Since mid-nineties he is working as professor at the piano department of the Conservatory in Enschede, the Netherlands. M. Markov is also the co-founder of the special Young Talents piano department of this Conservatory.
M. Markov has been invited to give Master Classes at many International Music Festivals and Summer Schools in the Netherlands, USA, Austria, Russia, Poland and Ukraine.
M. Markov is the founder and  the artistic leader of the International Piano Competition for Young Musicians in Enschede, the Netherlands. 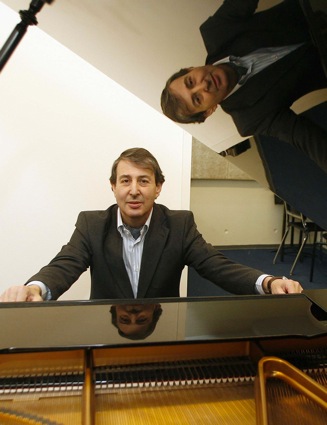